Remember – we are trying to use the tangible, traditional symbols of Christmas to teach our children the intangible, true meaning of the season.  As you hang your stockings, relate this story.  You can read about this in the book by Harold Myra called Santa, Are You For Real? Click on the name to see this available at Amazon.com.

The tradition of hanging Christmas stockings began with a story in ancient days about a kind man who had three daughters. In those days a dowry or money had to be given before a girl could marry.  When these girls fell in love and wanted to marry, the poor father could not afford their dowries.

A teenage boy named Nickolas (who later the Church made Saint Nickolas) heard about the plight of the daughters.  Because he loved Jesus so much, he wanted to give as Jesus did; one night Nick secretly put a bag of gold in each of the daughters’ stockings that were hung out to dry. The next morning the family found the gold bags and the daughters were married and lived happily ever after. Since then, children have been hanging Christmas stockings.

Jesus left the riches of heaven in order to give His life on the Cross for us, so we can have the gift of abundant life. This is the greatest message of Christmas!
Merry Christmas.  We love yall.
Billy and Sheilah Daws 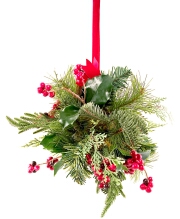 Mistletoe was used by Druid priests in their winter celebrations 200 years before the birth of Christ . They revered the plant because it remained green during the cold months of winter.

The ancient Celtics believed mistletoe to have magical healing powers and used it as an antidote for poison, infertility, and to ward of evil spirits. The plant was also seen as a symbol of peace, and it is said that among Romans, enemies who met under mistletoe would lay down their weapons and embrace.

Scandanavians associated the plant with Frigga, their goddess of love, and it may be from this that we derive the custom of kissing under the mistletoe. Those who kissed under the mistletoe had the promise of happiness and good luck in the following year.

First of all, since mistletoe was a symbol of peace in ancient days, it should remind us of the Prince of Peace who was born at Christmas.

Secondly, mistletoe today is the place for a kiss. Among the Arabs, the women and children kiss the beards of their husbands or fathers. The husband or father returns their salute by a kiss on the forehead. In Egypt, an inferior kisses the hand of a superior, generally on the back, but sometimes, as a special favor, on the palm also. To testify abject submission, and in asking favors, the feet are often kissed instead of the hand.

In scripture, we have the kiss of Judas as he betrayed Jesus in the garden. We also have the penitent woman who kissed the feet of Jesus. And there was the greeting given in the early church of a ‘holy kiss’.

But this Christmas when you see the mistletoe, think about two verses of scripture:

Psalm 2:12 Kiss the Son, lest He be angry, and you perish in the way, when His wrath is kindled but a little. Blessed are all those who put their trust in Him. That is, embrace the Son; depend upon Him in all your ways as your sovereign. To make peace with the Father, kiss the Son.

Song 1:2 Let him kiss me with the kisses of his mouth–for your love is better than wine. The Divine kiss is a metaphor of intimacy with Jesus and the ‘kisses of his mouth’ refers to the ‘words of Jesus’ which is the Word of God.

Let the mistletoe remind you that God is pursuing an intimate relationship with you that is developed as we embrace the Word of God! This is why Jesus was born!

Music Machine: The Fruit of the Spirit

Especially for Children…of all ages

The Bible in Pictures for Little Eyes

This is just 1 of about 200 Arch Books; each one tells a different Bible story with colorful illustrations.

The Tale of Three Trees: A Traditional Folktale

Santa, Are You For Real?

Easter Bunny, Are You For Real?

Thanksgiving, What Makes It Special?

This is 1 of many character building books by Michael Waite