Greater love has no one than this, than to lay down one’s life for his friends.
John 15:13

Jesus talked a lot about giving on Day Four of Passion Week.  Of course He had every right to do that since He was about to give the ultimate gift of His life on the cross for the sins of the world. 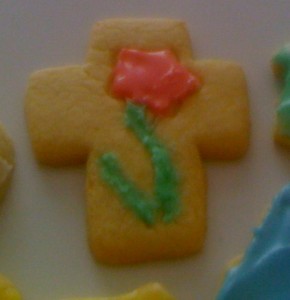 Encourage your children to give today as you talk about how much Jesus gave.  Bake Easter cookies (see recipe below) in the shape of a cross to share with neighbors.   As you make them,  talk about Jesus’ gift to us.  Say:

Everybody has done wrong things such as disobeying, lying, being unkind, etc.   God calls this sin and there must be punishment for it. But Jesus loved us so much that He took the punishment for all the wrong things that were done or would ever be done.  He died on the cross so we would not have to.  We can now have a happy life forever with God.

In your giving today, don’t forget to give thanks to Jesus for His gift of life to us.  Here’s some simple thankful songs  Make up your own songs together.

Here’s a cute video about the ultimate Gift 🙂 https://youtu.be/8SoSGDNWT2c

The Christmas season is not just sights and sounds. What is Christmas without the smells and tastes of Christmas cookies, Christmas ham, egg nog, wassail, candy, and other good things coming out of the kitchen during this season? 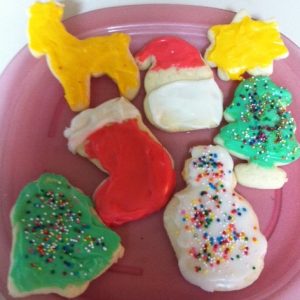 The history of Christmas Cookies began with the people of the Persian Empire of the 7th century AD. The actual word ‘cookie’ comes from the Dutch word Koeptje [koekje], meaning small cake. Cookies spread all over Europe by 1500. Gingerbread was probably the first cake/cookie to be traditionally related with Christmas. The people of Sweden preferred Papparkakor (spicy ginger and black-pepper delights), while the Norwegians took to the liking of Krumkake (thin lemon and cardamom-scented wafers).

Our Christmas cookies (pictured above) are my mother’s old-fashioned tea cookies: 3/4 cup crisco, 1 cup sugar, 2 eggs, 1 & 1/2 teaspoon vanilla, 2 & 1/2 cup Self-rising flour. Mix all together, roll out, cut into shapes, and bake at 350 for about 12 minutes.  Ice with butter cream frosting: 1 box confectioner sugar, dash of salt, 1 teaspoon vanilla, 1/4 cup milk, 1/3 cup butter.  Making the Christmas cookies is a family tradition that we all do together each year.

Wassail is a hot, spiced punch often associated with winter celebrations of northern Europe, such as Christmas, New Year’s and Twelfth Night. The term itself is a contraction of the Old English toast wæs þu hæl, meaning “be in good health”. A popular Christmas song mentions wassailing, which is groups of people either bearing wassail or begging for it, going from house to house singing and reveling. This is believed to be a custom of helping the poor without placing them in the category of, as a version of the song notes, “daily beggars”. It is also a way of preserving a perishable crop – apples, by turning them into something that can be preserved – cider, which is traditionally a central ingredient for Wassail. Today sugar, ale, ginger, nutmeg, and cinnamon are placed in a bowl, heated, and topped with slices of toast.

Yule Ham is a traditional dish in Scandinavian and English celebrations. The tradition is often suggested to have began as a tribute to Freyr, a major German god associated with boars and fertility. The boar’s head with apple in mouth was carried into the banquet hall as a sacrifice with the intent of imploring Freyer to show favor in the new year.

Our family enjoys a Christmas smoked ham (without the head). The recipe is simple: Trim the fat from a smoked ham. Wrap it in tinfoil and cook all night on Christmas Eve at 325 degrees. Next morning as you awake to a delicious smell, mix 3/4 can of coke, pineapple juice from a large can of pineapple, and one box of brown sugar. Pour over the ham and cook for one more hour. During the hour, baste often with the juice and sugar as deep into the meat as you can. Yummm!

Many believe that eggnog is a tradition that was brought to America from Europe. This is partially true. Eggnog is related to various milk and wine punches that had been concocted long ago in the “Old World”. However, in America a new twist was put on the theme. Rum was used in the place of wine. In Colonial America, rum was commonly called “grog”, so the name eggnog is likely derived from the very descriptive term for this drink, “egg-and-grog”, which became egg’n’grog and soon eggnog. Other experts say that the “nog” of eggnog comes from the word “noggin” which was a small, wooden, carved mug. It was used to serve drinks at table in taverns (while drinks beside the fire were served in tankards). The true story might be a mixture of the two and eggnog was originally called “egg and grog in a noggin”. This was a term that required shortening if ever there was one.

For our family, we enjoy “Christmas punch”. You take one half gallon of lime sherbert and you put it in a punch bowl with a 2 liter of ginger ale. Let the sherbert melt just a little. It is wonderful.

As you eat the Christmas cookies, remember the time that Jesus gave bread to his disciples as recorded in Mark 14:22, Jesus took bread, and blessed, and brake it, and gave to them, and said, “Take, eat: this is my body.” Jesus called Himself the Bread of Life…He will sustain us.

As you eat your Christmas ham, remember that Jesus was the once and for all sacrifice. Hebrews 7:27 He does not need to offer sacrifices every day like the other high priests. They did this for their own sins first and then for the sins of the people. But Jesus did this once for all when he sacrificed himself on the cross.

As you drink the eggnog, wassail, or the punch, remember that it is Jesus who will spice up the atmosphere and He is the only source of joy. Remember the verse in Luke 2:10 Then the angel said to them, “Do not be afraid, for behold, I bring you good tidings of great joy which will be to all people.”

Patience is “waiting until later for what I want now”. God is our perfect example of this as He wants our love and affection now, but He waits patiently until we are ready to yield to Him:

And remember, the Lord is waiting so that people have time to be saved…2 Peter 3:15

Don’t you realize how kind, tolerant, and patient God is with you? Or don’t you care? Can’t you see how kind he has been in giving you time to turn from your sin? Romans 2:4

Be humble and gentle. Be patient with each other, making allowance for each other’s faults because of your love. Ephesians 4:2

As parents, our patience is tested daily and there are times when we all think we have totally lost it. This is when we need to rest in the fact that through knowing God and by His power, we can endure anything:

We also pray that you will be strengthened with his glorious power so that you will have all the patience and endurance you need…Col. 1:11

One way our children learn patience is from observing us. They will usually respond to a situation the same way we do, so they need to see us exercising our patience in difficult situations. When we lose our patience, it can be make the situation worse; when we are patient, we have a calming effect on our children.

Howbeit for this cause I obtained mercy, that in me first Jesus Christ might show forth all longsuffering (patience), for a pattern to them which should hereafter believe on him. 1 Tim. 1:16

In addition to your modeling patience, you can have fun using creative activities to teach patience. Here are some ideas I have used through the years with my own children and with my two year old class this last month:

1. Our theme song for the month has been from a children’s musical called Music Machine

(click to see this album available at Amazon.com). To hear the song about patience click here 07-have-patience1.

2. In this song Herbert the Snail sings “Have Patience”. We had fun making a snail out of clay dough and painting it after it dried. To make the clay-dough, mix 1 cup flour, 1/2 cup salt, and 1/3 cup water. Roll the dough into a snake and curl it like a snail. Use a broken toothpick for feelers.

4. I had the children all sit down on the carpet and wait quietly until the timer went off (about one minute or so) and then I gave them a small treat and thanked them for waiting patiently.

5. We pointed out patience in any video we watched or book we read.

6. When we read The Tortoise and the Hare, we made a turtle out of a paper plate folded in half for its shell and then added a head, legs, and tail. We talked about how the turtle walked patiently toward his goal. 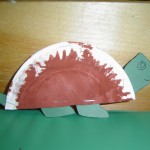 7. When we read Daddy, Are We There Yet, we pretended to take a car trip and talked about waiting patiently until we arrived at our destination.

8. I thanked them anytime I observed them using patience.

9. I acted out being impatient, which really surprised them to see me act like they do sometimes when they don’t get what they want and when they want it. 😛 ( I later apologized for not being patient)

I’m sure you can come up with more creative ideas of your own. Have fun and remember that with God’s power you can “Have Patience” 😉