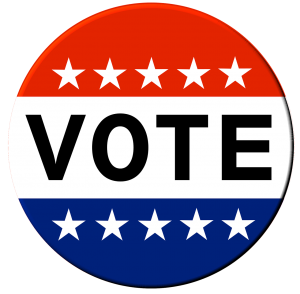 Tell your children that God gives us the responsibility to seek out people to lead us – that is why we have an election. Read and share with your children the story in 1 Samuel 16 where God gave Samuel the job to seek out a king for His people. This is what He told Samuel, “Do not consider his appearance or his height, for I have rejected him. The Lord does not look at the things man looks at. Man looks at the outward appearance, but the Lord looks at the heart.”(1 Samuel 16:7)

Lead your children in praying that everyone will look for and vote for leaders with good hearts. Samuel anointed David to be the new king.  God was very pleased – look what He said about David – “After removing Saul, he made David their king. He testified concerning him: ‘I have found David son of Jesse a man after my own heart; he will do everything I want him to do.’(Acts 13:22)”

It may seem as none of the candidates in this election fit this description but not voting at all is certainly not the answer. Let your children see you exercise your patriotic freedom and responsibility to have a voice in government – take them to the poll with you if possible and let them hear you pray for wisdom to know for whom to vote.

Then when the election is over, remember “God determines the course of world events; he removes kings and sets others on the throne. He gives wisdom to the wise and knowledge to the scholars. (Daniel 2:21)” We need to remind ourselves of this no matter who wins and explain it to our children.

Regardless of how one might feel about the results of an election, there is never a reason to talk unkindly about those whom God has allowed to be in positions of authority. Read and then tell your children the story from 1 Kings 24. King Saul had been trying to kill David. But when David was faced with an opportunity to kill King Saul, he said “May the Lord not let me put out my hand against my leader, for he is the Lord’s chosen one.”  The Arch Book The Angry King tells this story very creatively for children.

Finally, take heed to this exhortation from the Apostle Paul in 1 Timothy 2:1-2, “I urge, then, first of all, that petitions, prayers, intercessions and thanksgiving be made for all people-for kings and all those in authority”.  After this election it becomes our duty to pray for and give thanks for all those in authority. I want to purpose to intercede for our leaders and give thanks for those God has chosen to accomplish His purposes through in our country even if it will be to bring judgement on our land.

So use this election as another opportunity to establish God’s Word in your children. Make them aware that God has put in positions those whom He has purposed to be there (Daniel 2:21), and no matter who is in authority, God is still the King of kings and in control of everything (1 Tim. 6:15). And make a regular part of your praying with your children be for protection, wisdom, good hearts, and thanks for our leaders (1 Tim. 2:1-2).