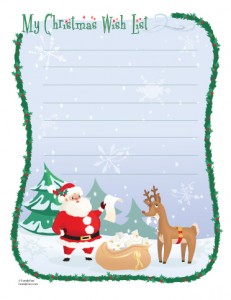 Whatever our age, we all see Christmas as the time for writing letters to “Santa”, enumerating the things we have been wanting all year. Over the years, Santa has gotten more letters requesting the Red Ryder BB gun and the Easy Bake Oven than any other toys.

The Red Ryder BB Gun is a BB gun made by Daisy Outdoor Products and introduced in 1938, named for the comic strip cowboy character Red Ryder. The BB gun is still in production despite the fact that the comic strip was cancelled in 1963. The Red Ryder BB gun was featured in the popular 1980’s film A Christmas Story, where the main character is desperate to get one, but is constantly thwarted with the warning “You’ll shoot your eye out”. The movie’s fictional BB gun, described as the “Red Ryder carbine-action, two hundred shot Range Model air rifle BB gun with a compass in the stock and a thing which tells time,” does not correspond to any actual production model. America’s first working toy oven, was turquoise and had a carrying handle and fake stove top. It was invented by designers at Kenner Products (now a division of Hasbro). In its first year, 1963, over 500,000 lucky kids talked their parents into spending $15.95. By its fifth birthday, the EASY-BAKE Oven was a household name. In 1965, Hasbro introduced the Kid Dinners for the oven which were mini TV-dinner-like trays partitioned into three sections to hold beef and macaroni, peas and carrots. In 1968, General Mills created very cool miniature boxed versions of its Betty Crocker products for the EASY-BAKE Oven. The oven is still in production 50 years later.

Now it is 2015 and the hot items are Disney Infinity, ipads, and iphones. And Legos still remain very popular. No matter what the item, we all have something we desire.

When you make your wish lists, just remember that all these things will never bring you complete fulfillment. But there is One who is the Desire of all people, whether they know it or not, who will bring fulfillment.

Haggai 2:7 I will shake all the nations, and the One whom all the nations desire will come. Then I will fill this house with glory, says the Lord of Armies.

Let your children see your desire and excitement about knowing God, the Creator of the World, who came to live among men and died for our sins!!!! John Piper said in his free, downloadable advent book, Good News of Great Joy, “If you can only make Christmas exciting with material things, how will the children get a thirst for God? Bend the efforts of your imagination to make the wonder of the King’s arrival visible for the children.”

Lead your children to think of what Jesus would desire for Christmas.  A great teaching aid is What God Wants For Christmas: An Interactive Nativity for Children (Book and CD)

Our family began years ago making a list of things we wanted to give to Jesus the following year, such as consistency in reading the Bible, encouraging our friends, taking better care of our bodies, learning a new skill, etc.  We wrap up the lists in a pretty package and it is the first present under our tree each year.  We open it at our birthday party for Jesus.  We now call it our Grown-Up Christmas List which becomes our prayer list for the year for each family member. 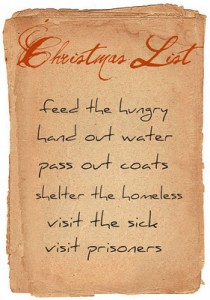