1 Samuel 3:13
I have warned him continually that judgment is coming for his family,
because his sons are blaspheming God
and he hasn’t disciplined them.

Galatians 4:19
My little children, for whom I labor in birth again until Christ is formed in you,

Disciplining our children takes discipline in our own lives and it is like being in constant
labor! (Gal. 4:19)  But if we don’t do it, there are consequences – God’s judgement on our families! (1 Sam. 3:13) 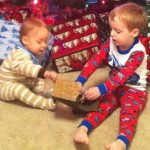 Thankfully these brothers have wise parents and the scenario actually goes like this:

When Hudson comes near the toys Grant has been playing with, Grant hears from a parent, “Hudson, Grant is playing with these toys. You can’t just take something that someone else is using. Let’s ask Grant nicely if he will share one of his toys.”  Then Grant chooses one toy he can let Hudson play with.  If Grant is not willing to share at least one toy, then he gets time out.  If he shares, he gets a star on a chart leading up to a treat when the chart is filled.   If Hudson continues to try to take the toys that Grant has set up to play with, Grant hears from a parent, “Hudson, Grant has already shared a toy with you; you might need a time out for a few minutes” and the parent tries to divert Hudson with something else.   Hudson gets time out if he still refuses to leave Grant’s toys.

When Grant takes a toy from Hudson, Grant is reminded that he can’t just take something that someone else is using and he must ask Hudson nicely if he will share a toy.  The parent helps Hudson find a different toy to share with Grant.  If Grant refuses the alternate toy from Hudson and makes a fuss, then he gets time out.

It takes zeal and perseverance to train children in the way they should go.   Don’t grow weary in well doing; you will see the fruit of your labor (Galatians 6:9)

For a one week lesson plan on sharing see http://www.trainupthechild.org/2011/01/12/sharing/

It is important to break his will and not his spirit before he is two.   He is becoming more autonomous, self governing, so whenever it is appropriate, give him choices . . . I think this would keep his spirit from being broken and will help him begin to feel that he has the ability to make wise choices.

I have always liked this quote to remind me that positive reinforcement is important:  “Be hearty in your approbation, and lavish in your praise.” Charles Schwab.   Catch him making the right choice with his behavior and heartily praise him for it.

Here are some words of advice from Susanna Wesley from Susanna, Mother of the Wesleys (Abingdon Classics)

“When turned a year old they were taught to fear the rod and to cry softly, by which means they escaped abundance of correction which they might otherwise had had, and that most odious noise of the crying of children was rarely heard in the house . . .”

“They were so constantly used to eat and drink what was given them that when, any of them was ill there was no difficulty in making them take  the most unpleasant medicine . . .”

“In order to form the minds of children, the first thing to be done is to conquer their will and bring them to an obedient temper.  To inform the understanding is a work of time, and must with children proceed by slow degrees, as they are able to bear it; but the subjecting the will is a thing which must be done at once, and the sooner the better, for by neglecting timely correction they will contract a stubbornness and obstinacy which are hardly ever after conquered, and never without using such severity as would be as painful to me as to the child.  In the esteem of the world they pass for kind and indulgent whom I call cruel parents who permit their children to get habits which they know must be afterwards broken.”

“And when the will of a child is totally subdued, and it is brought to revere and stand in awe of the parents then a great many childish follies and inadvertences may be passed by.  Some should be overlooked and taken no notice of, and others mildly reproved; but no willful transgression ought ever to be forgiven children without chastisement less or more, as the nature and circumstances of the case may require.  I insist on the conquering of the will of children betimes, because this is the only strong and rational foundation of a religious education, without which both precept and example will be ineffectual.  But when this is thoroughly done, then a child is capable of being governed by the reason and piety of its parents, till its own understanding comes to maturity, and the principles of religion have taken root in the mind.”

“I cannot yet dismiss the subject.  As self-will is the root of all sin and misery, so whatever cherished this in children ensures their after wretchedness and irreligion: whatever checks and mortifies it, promotes their future happiness and piety.  This is still more evident if we farther consider that religion is nothing else than doing the will of God and not our own; that the one grand impediment to our temporal and eternal happiness being this self-will, no indulgence of it can be trivial, no denial unprofitable.  Heaven or hell depends on this alone, so that the parent who studies to subdue it in his child works together with God in the renewing and saving a soul.  The parent who indulges it does the Devil’s work; makes religion impracticable , salvation unattainable, and does all that in him lies to damn his child body and soul forever.”

“Our children were taught as soon as they could speak the Lord’s prayer, which they were made to say at rising and bedtime constantly . . . They were soon taught to be still at family prayers, and to ask a blessing immediately after, which they used to do by signs, before they could kneel or speak..

“They were quickly made to understand they might have nothing they cried for and instructed to speak handsomely for what they wanted . . .”

In due season you will reap the rewards of your labor. Galatians 6:9  And let us not grow weary while doing good, for in due season we shall reap if we do not lose heart.

Hear these stages explained in a sermon by Dr. Billy Daws Fathering and Family

Mother primarily works with child during this stage. Father’s responsibility is to keep mother happy.

Father has the important role in this stage.  Begin Life Notebook

7.  Heritage Stage (Left to Others after Death)

Focus on Written and Living Epistles