And then he told them, “Go into all the world and preach the Good News to everyone, everywhere.
Mark 16:15

“Christopher Columbus had a belief that God intended him to sail the Atlantic Ocean in order to spread Christianity. He said his prayers several times daily. Columbus wrote what he called a Book of Prophecies, which is a compilation of passages Columbus selected from the Bible which he believed were pertinent to his mission of discovery.  Columbus’s own writings prove that he believed that God revealed His plan for the world in the Bible, the infallible Word of God. Columbus believed that he was obeying the mission God staked out for his life when he set sail west across the Atlantic Ocean.”  Phyllis Schlafly Radio Script, October 14, 2002

Washington Irving wrote of Christopher Columbus: “ Whenever he made any great discovery, he celebrated it by solemn thanks to God. The voice of prayer and melody of praise rose from his ships when they first beheld the New World, and his first action on landing was to prostrate himself upon the earth and return thanksgivings.”

Teach your children that each Columbus Day, we celebrate the life of a brave explorer who loved Jesus and obeyed the Bible’s command to spread the gospel.  He landed in the Americas on October 12, 1492. It was first celebrated in 1866.   October 12th was made a federal holiday in 1934.  Since 1970 it has been celebrated yearly on the 2nd Monday of October.

The results of Columbus sailing the ocean blue was the discovery that the Earth was indeed round and also the settlement of new lands.  This resulted in the further spreading of the Good News which led eventually to our hearing the Gospel of Jesus.

Therefore if the Son makes you free, you shall be free indeed.
John 8:36

Another holiday is another opportunity to teach your children.  Try to always have a centerpiece that represents the holiday so you can be reminded to talk about it at meal times. 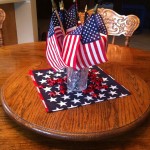 While we may not agree with everything happening in our country right now, we still need to celebrate with our children the fact God has allowed us to live in a free country and that many brave soldiers have fought physical and spiritual battles to ensure we have freedom.

Explain that we have physical freedom in our country to go where we want to go and do what we want to do.   Soldiers gave up their lives so we could live in a free country.  Tell your children about America’s history.  Watch these informative Early American Series videos and then retell the stories in your own words to your younger children; be animated and use visuals if possible.  Older children might enjoy watching the videos.

Be sure and emphasis that we have the highest form of freedom, spiritual freedom, because Christ died on the cross to set us free from the punishment for sin and free from the power of sin which is freedom to make wise choices.  Since Christ’s death and resurrection, many soldiers for Christ have fought spiritual battles against the enemy, Satan, so we can know the message of salvation.

Thank you, God, for the freedom we have in our country to go where we want to go and do what we want to do.  Thank you, Jesus, for dying on the Cross so we can be free from the punishment and power of sin.  Thank you for the soldiers who fight for freedom.

Start a tradition of each 4th of July reading the Midnight Ride of Paul Revere and/or The Declaration of Independence and playing patriotic music all day.

Here’s a great site with lots of info and ideas http://powerofmoms.com

March to patriotic music holding flags you made or purchased. 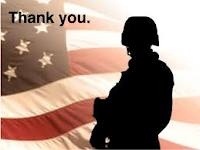 God made a decree many years ago that we set up memorials to help our children know about the things that happened in the past:

Joshua 4:6-7
We will use these stones to build a memorial. In the future, your children will ask, “What do these stones mean to you?” Then you can tell them, ‘They remind us that the Jordan River stopped flowing when the Ark of the Lord’s covenant went across.” These stones will stand as a permanent memorial among the people of Israel.”

During this Memorial Day weekend be sure to talk to your children about the reason for the celebration. Help them know it is more than just grilling out or going to the beach.

Memorial Day originally began in 1868 as a day to decorate the graves of soldiers who died in the Civil War. In more recent years our government passed a resolution that Memorial Day be observed on the last Monday of May as an occasion to remember and honor the men and women who died in all wars.

Talk about the picture below with your children.  Tell them that brave men fought and died so we could have freedom. 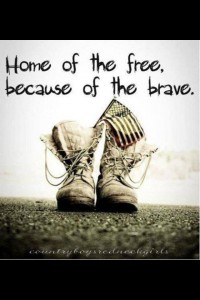 As you enjoy your extended weekend, don’t forget to let your children know why it is happening.

Presidents’ Day is intended to honor George Washington and Abraham Lincoln whose birthdays are both in February.  Their birthdays were observed separately until 1971 when Congress decided the two would be combined into one national holiday celebrated on the third Monday of February.

This is a great time to teach your children about the godly character of these two men. God tells us to remember how He dealt with our ancestors: 1 Cor. 10:1 Remember our history, friends, and be warned. All our ancestors were led by the providential Cloud and taken miraculously through the Sea.

Tell them about the truthfulness of George Washington even as a young boy in the story of the cherry tree.  Here is a site that tells the story and has printable coloring pictures:

George Washington, sometime before the age of 16, transcribed “Rules of Civility & Decent Behavior In Company and Conversation.” These are good rules to teach your children. This site depicts them in cartoons.

Read at this site and then share with excitement in your own words about how God divinely protected George Washington during the French and Indian War.  You can read the entire account of this in the book  The Bulletproof George Washington

Tell your children why Abraham Lincoln became known as ‘Honest Abe’.  Read about it here and get printable coloring sheets as well.

Read this article about the faith of Abraham Lincoln.  This is what he said before the Battle of Gettysburg” . . . oppressed by the gravity of our affairs, I went to my room one day and locked the door and got down on my knees before almighty God and prayed to Him mightily for victory at Gettysburg. I told Him that this war was His, and our cause His cause . . . Then and there I made a solemn vow to almighty God that if He would stand by our boys at Gettysburg, I would stand by Him. And after that, I don’t know how it was, and I cannot explain it, soon a sweet comfort crept into my soul. The feeling came that God had taken the whole business into His own hands, and that things would go right at Gettysburg . . .” from Abraham Lincoln: The Man & His Faith

We can use this day to pray for our current president and leaders as well.  They have been placed in their position by God: Daniel 2:21 He changes times and periods of history. He removes kings and establishes them. He gives wisdom to those who are wise and knowledge to those who have insight. Download this coloring sheet that gives suggestions of what to pray for our leaders.

Enjoy your long weekend and have fun teaching your children as you go!!! 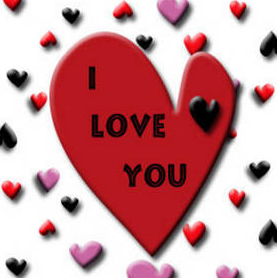 The emperor was so upset when he heard that Valentine was still telling people about Jesus, that he had him killed.  Before Valentine died on February 14, he sent a message to the jailer’s daughter whom he had fallen in love with.  He signed the message ‘from your Valentine’ and this is where the sending of ‘Valentines’ began.

Click on the picture to order this illustrated book about Valentine: