In the beginning God created the heavens and the earth.
Genesis 1:1

He created everything there is–nothing exists that he didn’t make.
John 1:3

Foundational to our belief system is our thoughts on how ourselves and the world around us came into being.  The Bible makes it very clear how the world began.  Let’s spend this week talking about the week of Creation as it is recorded in Scripture.  Begin by reading Genesis 1 for yourself.  Then each day tell your children what God made on that day during the week of Creation.  I hope by now you have a good Bible story book with illustrative pictures of what God made.

Share the above verses often as you use songs, hands-on activities, games, crafts, books, pictures, etc. to establish this truth in your children.  I’ll give you some suggestions each day, but I’m sure you can be more creative.

You might want to use the following song this week:

While in prison, he witnessed to the guards.  One of the guards had adopted a blind girl and asked Valentine if his God could help the daughter see again.  Valentine prayed and the girl was given her sight.  The guard and his whole familly believed in Jesus and were baptised.  Valentine fell in love with the girl.  When the emperor heard about Valentine making converts in prison, he was furious and had Valentine beheaded.

How to Relate This to Children:

The ruler of Rome, Emperor Claudius, thought there were many gods, but a man named Valentine told people that Jesus is the one true God.  This made the Emperor Claudius very angry so he had Valentine put in jail.  But even in jail, Valentine kept telling people about Jesus.  The guard in the prison had a blind daughter and he asked Valentine if God could heal her.  Valentine prayed for her and God caused her to see again.  The guard and his whole family believed in Jesus after that.

Because Valentine loved Jesus so much, the Catholic church named him a ‘saint’ which is what someone is called that loves Jesus and cares about others.  Each year we think about those we love and send them Valentines.  Let’s remember that that the first Valentine was sent by a man who loved Jesus very much.

On Valentine’s Day we may get flowers, cards, candy, or other things from friends who love us,  but the very best gift that was sent to show love to us long ago when Jesus was born to one day die on the cross for the wrong things we have done.  The Bible says “No one has greater love than this, to lay down one’s life for one’s friends.” (John 15:13)

Emphasize God’s love for them, their love for God, and love for others as you work. 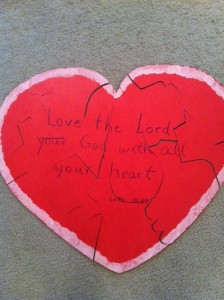 Honesty is “being careful of what you say and do so others can trust you”.  As usual God is our example.  Many times in Scripture God says, “I have said it; I will perform it.”  Hebrews 10:23 says “Without wavering, let us hold tightly to the hope we say we have, for God can be trusted to keep his promise.”

We are encouraged throughout Scripture to be honest:

In teaching our children honesty, we must be an example to them.  Always do what you say you will do.  If you make a promise, keep it; and never make a threat in disciplining that you can not follow through with if they disobey (example: I will throw you out the window if you scream one more time)  Children need the security of knowing they can trust Mom and Dad.  A child’s healthy relationship with his parents paves the way for a healthy relationship with God.  We are God’s representative to them and need to show them they can trust us and Him.

Tell your children stories of men and women in history who told the truth and those that didn’t and suffered the consequences.  Here are a few book or website suggestions:

Who Can Trust You, Kangaroo? (Sweet Pickles Series)

The Son Who Said He Wouldn’t (Arch Books)

George Washington and the Cherry Tree

The following is a song with signing about honesty:

With a new grand baby in our family, sleep has become a big topic of discussion.  At the top of Becca’s Christmas list was “sleep”.  Grant has now given them some nights of sleeping all night!!!

The night feedings are a great time to memorize scripture and pray.  I think probably one of the main scriptures and prayers I had at that time in my life was Psalm 127:2 . . . He gives His beloved sleep. 😉

Psalm 4:8 (I will lie down in peace and sleep, for you alone, O Lord, will keep me safe) is a great verse to have  young children memorize if they have a problem sleeping.  Guide them  to memorize any “I will” verses as it helps bring their wills under God’s control.

There are also foods that are supposed to help you sleep.  Here are a few I found in my research: lettuce, bananas, oatmeal, turkey, warm milk, and chamomile tea.

I hope you find these suggestions helpful if you or your child are having trouble with insomnia.

We can trust God to give us the rest we need.

My mentor, Jo Bevington, sent me a letter recently.  I am sharing it with you so you can hopefully capture her  passion for establishing God’s Word in children, and you can feel the joy she possesses in her life.  Keep in mind that she is 85, never had children of her own,  has been a widow for about 40 years, and had a stroke recently which has left her unable to see very well and unable to walk without a walker.  The only thing she has expressed regret about her situation is that she just had to give up teaching her preschool Sunday School class because her walker was too much of a distraction and safety hazard for the children.

What joy it has been to talk to you on the telephone!

These are the preschool Bible thoughts I was telling you about.  What joy it is to me to make me a pocket verse everyday and by the end of the day I have memorized it…..So I think what fun it would be for families of preschoolers to make their child a “pocket verse” every day.  Since young children are concrete learners, the words of the Bible might become valuable to them if they carried around a little Bible thought each day.

Today was a fun day for me.  Rebecca, who cleans my house, decided she wanted to learn to play piano.  And it has been great joy for me to teach her.  We just take time out from her work and have a lesson.  I am trying to play again, even though it is very hard to see.  I can only do it a short time each time I try.  But the Lord is Good!  I can still play.

I love you, Sheilah!

Jo’s joy, in spite of her circumstances, comes from her daily contact with God through His Word.

Listed below are some of the Bible thoughts she mentioned.  If you want to see more,  please contact me.  Deuteronomy says we are to be ready to share God’s Word with our children as we go about our daily routine.  I liked Jo’s idea of putting it on a card and giving the child something tangible to hold on to all day.

God called the light ‘day’ and the darkness he called ‘night’   Genesis 1:5

God made all kinds of trees to grow.  Genesis 2:9

Everything God made is beautiful.  Ecclesiastes 3:11